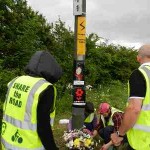 For the fourth year after the death of Marie Vesco, her family and friends visited the site on the A23 where she was killed, to put flowers and a picture of her at the site, and to remember her. They also had the chance to inform a few cyclists about the cycle path that runs parallel to the road. The cyclists were riding along the very spot where Marie got killed. They had followed the signs trying to reach the cycle path, but said signs only led them back North. 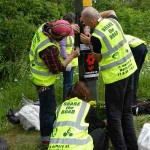 Arranging the picture and poster

On the 4th of June 2008, Marie Vesco was cycling in a group of ten to a demonstration against the Arms Fair in Brighton, when she was killed by two cars whose drivers were not respecting the highway code. None of them was charged or faced with prosecution. 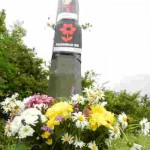 After a faulty investigation by Police, the Crown Prosecution Service decided that there was not enough evidence to prosecute any of the drivers.

The family had only six months after the crash to initiate private court action, but they were not notified of this fact in time and vital information they needed to initiate such action was not made available to them until six months and one day after the crash. Furthermore, they were required to pay approximately a £1000 for access to the police report. 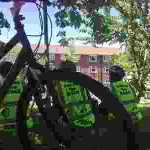 Right before the inquest, Marie’s family were shown video footage of the cyclists, taken by police minutes before the crash. The police later lost this footage.

At the inquest, the fact that both drivers were in breach of a number of the highway code rules at the time of the crash, was dismissed (“all drivers do that”). More attention was given to the cyclists’ unfamiliarity with the road (“did you not check your route on the internet before heading off?”) than on the car drivers’ lack of due care. 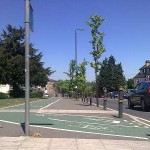 Bike lane on the pavement

During the months that followed the crash, friends and family of Marie tirelessly campaigned for proper signage for cyclists from Crawley to Brighton, and also on the A23, to direct them to available alternatives. With the cost of signage for cyclists not being covered by tax revenues, as signage for cars is, it took more than a year for the relevant authorities to put up the requested signs. 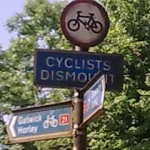 Cyclists dismount on this Bike Lane

On the first anniversary, in 2009, friends and family of Marie placed a ghost bike at the site of the crash. It was removed by the local authorities a day later on “security grounds”. 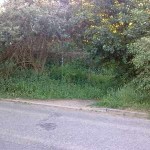 The bike lane is the path among the bushes

On the second anniversary, a two-day bike ride remembered Marie and served as an audit of the signs that Marie’s family and friends had been campaigning for. 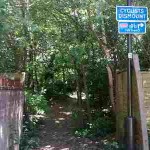 The family wanted to see for themselves the flashy bike lane the local authorities had showed them pictures of, only to discover that the new paving they had seen in pictures was present in only a few metres of the route. The rest of it consisted mainly of on-road routes, pavements and horse trails advertised as practicable from May to September where, in wet spots, were hard to negotiate even in June. 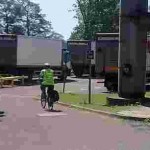 On the third anniversary, the family had to replace the picture of Marie they had put up on a lamp post on the A23 where she was killed, which seemed to have been removed, alongside a poster of RoadPeace, organisation that has greatly helped Marie’s friend and family in their ordeal.

This year, as well as putting a new picture and flowers at the lamp post, a small garden was initiated, with compost to which Marie had contributed when she lived in London. 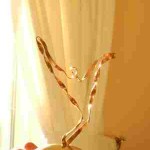 Inscription in French: "Marie Vesco - an angel among angels"

The presence of cyclists who found no option but to end up on the A23 after trying to use alternative routes proves that the routes and signage for a safe cycle journey in the area still leaves much to be desired.

From the site, family and friends left, to exchange presents, to tour Europe. 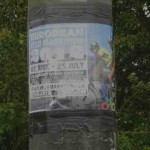 Here are some of her friends’ tributes: blog, poem, dialogue site.

And a cyclists’ obituary.