I arrived pretty late at the site of the closure. Coming from the south, the canal, and its bike-and-pedestrian lane, is closed all along the Olympic complex – the object of protests and Sunday demonstrations.

The “alternative” route I took aided by obsolete maps, had no option but one-way systems and roundabouts next and under the motorways. I found signs for cyclists non-existant except to divert cycle traffic off the road and on cycle lanes leading only to parks. Roundabouts designed for motorised traffic are not notorious for having the names of the street clearly signposted either.

When I got there the atmosphere was quite chilled; it looked more like a picnic than a demonstration. About five photographers with huge cameras entertained themselves by taking pictures of one of the demonstrators’ dog licking some protest material. Eventually they left, and so did the two policemen commissioned with “facilitating” the protest.

One of the organisers related the reaction of one of the police officers present at the first demonstration they held: “I didn’t even know that this path was blocked, until I was told about you guys demonstrating”. She also noted the contradicting messages people are getting, with some authorities telling them they should get on their bikes and others prohibiting them using facilities like the DLR and now the tow path.

While some demonstrators felt they were at least making some noise and highlighting the issue, some other felt the only thing that would brings proper attention from those in power would be if some one got killed while following the diversion signs.

They explained how unnerving it is that in all the publicity issued by public bodies, including in the Olympic special editions of the bike maps courtesy of Transport for London, the now closed-down path features prominently as a bike-and-pedestrian route for the Olympic site.

Simon Cole of Hackney Tours explained how when Hackney was still rural, the railway that now goes into Hackney Central was built over a crook. In the 1600s the rich from The City would use the as a second home or a place to escape from London.

Hackney Marshes used to be a lammas land, which meant that, between April and August, the land was divided into strips and each would cultivate their own plot; then from the first of August and through the winter, every one could graze their cattle. There was a big tradition of common land in Hackney and London, which meant that everyone could use the land.

Nowadays local residents are struggling to keep the marshes for common use and against further enclosures.

After the demonstration I headed north on what is left of the tow path and found quite a few signs relating to the Olympics, some of them angrily defaced. 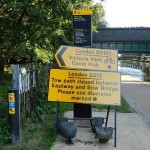 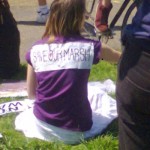 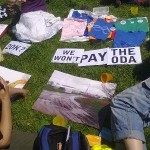 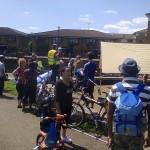 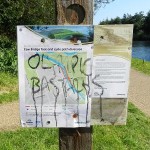 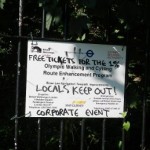 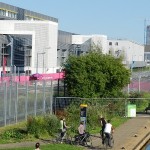 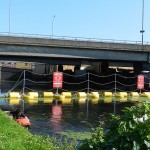 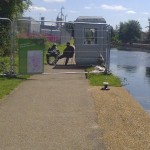